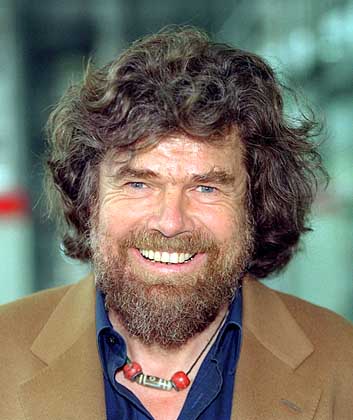 In these days there is much talk about the interview Reinhold Messner granted to the Italian newspaper La Repubblica on September 6th, 2014, with the following title: Reinhold Messner celebrates his70 years: ”My mountaineering has failed”.
The matter of debate is his statement that his mountaineering is dead, has failed. For the reason that nowadays it is no more followed by the young people.

Here below you can find the short movie with the interview. Please follow it carefully:
http://video.repubblica.it/cronaca/reinhold-messner-compie-70-anni-il-mio-alpinismo-e-fallito/176505/175208

Now I can try to summarize what Messner says in few key concepts.

In the very beginning he seems to examine the changing by means of the “parcellation” of mountaineering, but instead of making a complete analysis of all the various activities, probably due to needs for concision, he just mentions the competitive aspect inside the indoor climbing areas, creating in the listener the impression that young people do just that and nothing more.

Messner then denounces the situation that has come about both in the Alps and in Himalayas, where the greatest peaks are summited with such an expense in terms of men, of means and of preventive safety equipment that the definition of “high-altitude tourism” can be justified. Also in this part Messner – and let’s assume once again it is due to the tyranny of the very few time – does not even mention the hundreds of bigger and smaller “expeditions” made every year to the mountains all over the world and which cannot absolutely be confused with tourism.

Immediately after that, Messner introduces the main issue, i.e. that traditional mountaineering has now become marginal due to the fact that the mountaineering practitioners are just “a few”, although “excellent”.

The conclusion is quick and effective, as well as, in my opinion, rushed and inappropriate, and says simply that his own mountaineering, meaning the traditional one, has failed and ended, maybe together with Walter Bonatti.

That kind of mountaineering, which meant exploring and fighting the great mountains by fair means, “is not followed anymore by young people” (who now happen to be, from “just a few”, absolutely no one, so, just for the sake of emphasis).

Later on, Messner correctly states that his generation was lucky, since still virgin ground could be found and because it was culturally nourished by a society which gave the young people a hope and which placed trust in them. Nowadays the society offers them only “a closed and overcrowded world, without any opportunity to have a job and with no possibility to express their own personality” with facts and achievements.

In my opinion, however, I do not think, unlike what has unfortunately been written, that Messner is highlighting the excellence of the mountaineering of his time in comparison with the one of today. No, on the contrary he even praises those “very few really great ones” who are now practising it and even seems to imply that, if compared with his own times, a lot of progress has been made. The problem lies in the fact that Messner, at the end of the whole speech (and so, unfortunately, also in this sensational title, for which, by the way, he shall not be held responsible) even denies the existence of some modern traditional mountaineering!

This denial is not in line with reality. Nowadays even the less informed ones can follow the daily reports thanks to web portals and specialised journals: should also they be lacking, it’s sufficient to follow each year the Piolet d’Or, where every achievement, even the ones which in the end receive “no nominations”, have an absolute value, with a precise place in the evolutionary scale, so let’s only imagine the finalists!

The ascents of Matteo Della Bordella, Luca Schiera, Ermanno Salvaterra, Rolando Garibotti, Denis Urubko, Hans-Jörg Auer, Ueli Steck, Andy Kirkpatrick, Leo Houlding, Sandy Allan, Rick Allen, Steve House, Alex Honnold, just to quote them with no particular order and within a list which is clearly incomplete, are in no way the adventures of late epigones, imitators of the great mountaineering of the past: no, they are great adventure achievements, with a technical level which only twenty years ago was still inconceivable, and all this not to mention the fantastic rock climbing achievements whose level can be defined at least as sublime.

About all this there is no lack of information and if we consult and review it with careful and impartial eyes, it reveals that the practitioners of “traditional mountaineering” are absolutely not “very few ones”, and in any case they are numerically not less than thirty or forty years ago.

I really regret for this unfortunate interview granted by Messner, because at its end we can see more and more clearly arise the tedious suspicion he wanted to mean something like Sanson’s “Let me die with the Philistines”!.

All his more than proven historical analysis skills and his experience, which are, in terms of quality, not inferior to his own personal and astonishing great adventures all over the world, in this case appear to be somehow tarnished. I think he should get back to his own usual level, by writing a clarification himself. He surely has the possibility and maybe also the time… Shouldn’t we all be retired at the age of seventy?